When I first arrived, at the beginning of the worst winter on record, I spent as much time as I could, despite the perishing cold and damp, on the shoreline. It is at low tide that the sea reveals it’s secrets. Human and pre-human history exist in layers, one atop the other. When the seas are raging and the tides flowing, those layers are peeled back and made visible once again.

On the beach below the hut, layered in the Bulverhythe sands, are 4,500 year old prehistoric forests, an eighteenth century shipwreck, and acres of palaeolithic rocks. Most of the time, these are hidden from site and preserved beneath the sand. Last winter, the storms stripped much of the sand away and revealed a patchwork of rocks and petrified trees surely unsurpassed anywhere on the British coast. 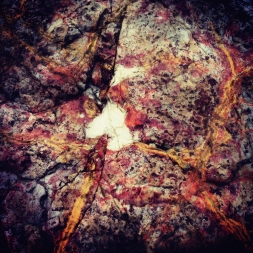 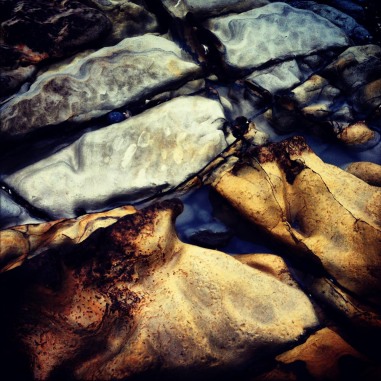 Exploring this extraordinary diversity of rock and wood, recording the intricate patterns and rock types I, very much a novice geology enthusiast, had never seen before, I could not believe that I had the whole beach to myself. Why was no one else there to record what I saw?

I now know this is because no one knew it was there. They were all, very sensibly, tucked up out of the wind keeping warm and dry. Only when talking to other people, sharing photos, and as the year progressed and the sands shifted to cover the rocks again, did I realise that what I had recorded was rarely, if ever, visible.

It is the photos of the rock formations the proved most popular at the recent open studio. Three of five geology studies sold – including one to a local geologist. Someone I need to have a proper chat with some time; to learn more about these rock formations, their creation and composition.